Archaeologists in Rome have unearthed the colossal portrait head of the Roman empress Faustina, wife of the emperor Antoninus Pius, who ruled from A.D. 138 to 161.

The find comes almost exactly one year after archaeologists discovered the remains of a colossal 16 foot statue of the emperor Hadrian (A.D. 117-138) at a spot about 6 m (20 feet) away.

Both the Hadrian statute and Faustina head come from the largest room of the Roman Baths at Sagalassos, which have under excavation for the past 12 years.

This roomcross-shaped, with mosaic floors, and up to 1250 sq. meterswas most likely a cold room or frigidarium.
Earlier, the researchers though that the Faustina head probably belonged to Vibia Sabina, who was only 14 years old when she was forced into marriage with Hadrian.

But it was clear once the head, which was face down, was turned over, that it represented a woman more mature than as Sabina was usually portrayed.

The head is 0.76 m in height (2.5 feet). It has large, almond-shaped eyes (only the tear ducts are rendered, not the iris or pupils as became usual during the reign of Hadrian) and fleshy thick lips.

Its hair is parted in the middle of the front and taken in wavy strains below and around the ears toward the back.

On top of the head is a circlet, a feature typical for most of Sabinas portraits, yet in this case the whole physiognomy of the face clearly indicates it is the empress Faustina the Elder, wife of Hadrians successor Antoninus Pius.

Not sure why ThaIndian (or rather the ANI) seems to always be first off the mark on these things lately ... in the past few minutes, though, the BBC has posted their version, which includes a photo: 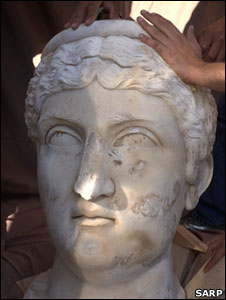 The i.d. seems right to me (unlike the Julius Caesar thing, which I still doubt) ... here's a comparative bust from VRoma: 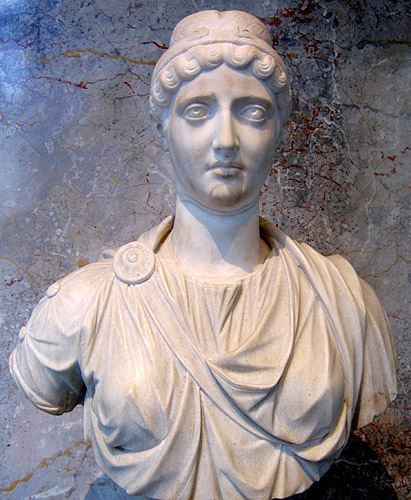 Posted by david meadows on Aug-14-08 at 8:39 AM
Drop me a line to comment on this post!
Comments (which might be edited) will be appended to the original post as soon as possible with appropriate attribution.