rogueclassicism
quidquid bene dictum est ab ullo, meum est ~ Seneca ... from the archives
Further Thoughts on the 'Lupercal'
We're now getting the 'reaction' to the story ... this one is starting to fill my box in various versions. From Reuters:

A leading Italian archaeologist said Friday that the grotto whose discovery was announced this week in Rome is not the sacred cave linked to the myth of the city's foundation by Romulus and Remus.

The Culture Ministry and experts who presented the find said they were "reasonably certain" the cavern is the Lupercale -- a sanctuary worshipped for centuries by Romans because, according to legend, a wolf nursed the twin brothers there.

But Adriano La Regina, Rome's superintendent of archaeology from 1976 to 2004, said ancient descriptions of the place suggest the Lupercale is elsewhere -- 50 to 70 meters northwest of the cave discovered near Emperor Augustus' palace. "I am positive this is not the Lupercale," La Regina told Reuters in an interview.

Instead, he believes the cave -- which ministry pictures show is decorated with well-preserved seashells and colored mosaics -- was a room in Nero's first palace on the Palatine Hill, which burnt down in 64 AD in the great fire of Rome.

The Culture Ministry had no immediate comment on the statements from La Regina, who pointed to a description of the Lupercale given by Greek historian Dionysius of Halicarnassus in his major work on early Roman history, "Roman Antiquities."

Dionysius said the Lupercale, which draws its name from the Latin word for wolf, was close to the Temple of Victory, also on the Palatine Hill, while the cave unveiled this week was found near the Temple of Apollo.

"If this were the Lupercale, Dionysius would have surely mentioned the Temple of Apollo, which was much bigger and more famous than the Temple of Victory," said La Regina.

He said the mosaics and other decorations found in the cave were typical of Nero's era and its structure similar to a grotto found in the emperor's new palace, the lavish Domus Aurea (House of Gold) he built after his first mansion went up in flames.

According to La Regina, the cave was a nymphaeum, or an artificial grotto used for dinners and receptions, which often had a fountain.

"This remains a great discovery because it is so well-preserved," he said.

The cave was found thanks to a camera probe 16 meters (52 feet) underground in a previously unexplored area during restoration work on the palace of Augustus, the first Roman emperor.

According to the myth, Romulus and Remus, twin sons of the god Mars, were abandoned in a cradle by the banks of the river Tiber where a wolf found them and fed them with her milk.

The brothers are said to have founded Rome at the site on April 21, 753 B.C. and ended up fighting over who should rule. Romulus killed Remus and became the first king of Rome.

I've been pondering this (re)discovery for a couple of days now and folks hopefully remember I mentioned the possibility of it being a nymphaeum the other day (i.e. not the cave itself) based primarily on the seashell decorations and how 'incongruous' such a setting would be for the rituals which emanated from there. I wondered where the idea that the Lupercal had been turned into a nymphaeum (which is what seems to be claimed in several places; it seems obvious that the archaeologists do recognize the decorations are more appropriate for a nymphaeum) came from and eventually checked the Res Gestae via Bill Thayer's site, where, of course, Augustus says that he built (among other things) the Lupercal. The note to the version (Loeb, 1924) at the site says:

Formerly a cave in the rock on the south-west of the Palatine, where the she-wolf was supposed to have suckled the twins. It was now converted into a nymphaeum.

I haven't been able to track down where this "converted to a nymphaeum" claim comes from, but I suspect it is from this marble base, which looks like it's from the first century or so (via VRoma): 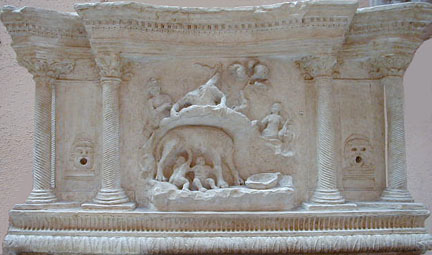 Then again, we have another sculpture of Hadrianic/Trajanic date purporting to show the Lupercal (via Wikipedia): So I'm still wondering where this claim that the Lupercal was converted into a nymphaeum comes from and I still am very skeptical that this reannounced discovery is, in fact, the Lupercal. All these announcements seem to be very orchestrated and are following a pattern which I alluded to on the Classics list the other day (announce a spectacular find which will generate much interest, then have it followed up by more scholarly reaction) -- whether this is to be attributed to 'gullible journalists' or is something carefully manipulated by the pr crew for Italian archaeology is up to you to decide.
Posted by david meadows on Nov-24-07 at 9:04 AM
Drop me a line to comment on this post!
Comments (which might be edited) will be appended to the original post as soon as possible with appropriate attribution.