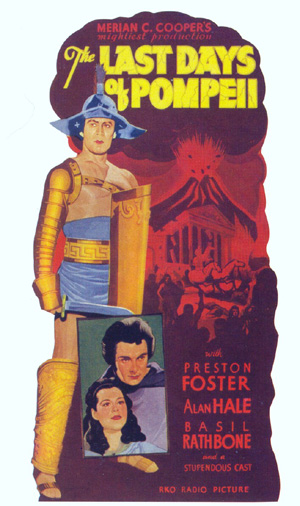 Well, since it's such a slow news day and I think I've got enough of these to post one per day right up to the anniversary of the eruption, I'll begin a series of posts of posters/movie cards from the 1935 epic Last Days of Pompeii. I love the one-sentence outline from the IMDB: In the doomed Roman city, a gentle blacksmith becomes a corrupt gladiator, while his son leans toward Christianity.

The posters themselves have a wonderful 'warholesque' quality to them, even though they obviously predate him.

Posted by david meadows on Aug-11-05 at 7:06 AM
Drop me a line to comment on this post!
Comments (which might be edited) will be appended to the original post as soon as possible with appropriate attribution.