rogueclassicism
quidquid bene dictum est ab ullo, meum est ~ Seneca ... from the archives
Odyssey Card
Since I'm in a posting of images mood, here's another one from my hard drive: 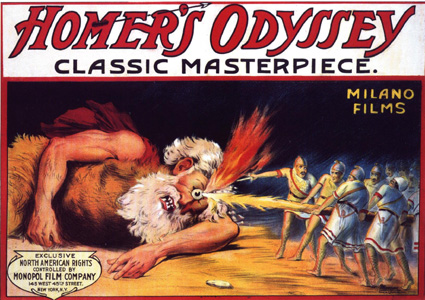 It's a movie card from a movie version of the Odyssey, obviously, but I've never managed to track down when this thing was made. It looks 1930s or 1940s, but isn't (near as I can tell) in the IMDB. Anyone have any details?

UPDATE: John Kennedy (via the forum) and Nick Lowe (via email) have both suggested it is the English version of the Italian Odissea, from 1911 and in the IMDB. I think I've got a couple of more cards somewhere ...
Posted by david meadows on Aug-01-05 at 7:42 AM
Drop me a line to comment on this post!
Comments (which might be edited) will be appended to the original post as soon as possible with appropriate attribution.