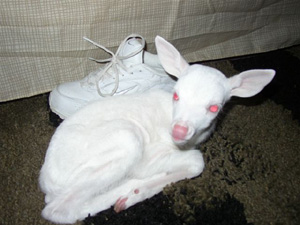 Still going through a bit of stuff that might be considered backlog, I remembered this photo, which my uncle sent me. It's the albino (obviously) fawn of a whitetail deer that a friend of his found wandering without a mother near Edmonton. It has since been put in the care of folks who know what to do with it, but of course, it put me in mind of Sertorius

Here's a chunk of Plutarch's Life of Sertorius:

The Lusitanians having sent for Sertorius, he left Africa, and being made general with absolute authority, he put all in order amongst them, and brought the neighbouring parts of Spain under subjection. Most of the tribes voluntarily submitted themselves, won by the fame of his clemency and of his courage, and, to some extent, also, he availed himself of cunning artifices of his own devising to impose upon them and gain influence over them. Amongst which, certainly, that of the hind was not the least. Spanus, a countryman who lived in those parts, meeting by chance a hind that had recently calved, flying from the hunters, let the dam go, and pursuing the fawn, took it, being wonderfully pleased with the rarity of the colour, which was all milk-white. As at that time Sertorius was living in the neighbourhood, and accepted gladly any presents of fruit, fowl, or venison that the country afforded, and rewarded liberally those who presented them, the countryman brought him his young hind, which he took and was well pleased with at the first sight; but when in time he had made it so tame and gentle that it would come when he called, and follow him wheresoever he went, and could endure the noise and tumult of the camp, knowing well that uncivilized people are naturally prone to superstition, by little and little he raised it into something preternatural, saying that it was given him by the goddess Diana, and that it revealed to him many secrets. He added, also, further contrivances. If he had received at any time private intelligence that the enemies had made an incursion into any part of the districts under his command, or had solicited any city to revolt, he pretended that the hind had informed him of it in his sleep, and charged him to keep his forces in readiness. Or if again he had noticed that any of the commanders under him had got a victory, he would hide the messengers and bring forth the hind crowned with flowers, for joy of the good news that was to come, and would encourage them to rejoice and sacrifice to the gods for the good account they should soon receive of their prosperous success.

By such practices, he brought them to be more tractable and obedient in all things; for now they thought themselves no longer to be led by a stranger, but rather conducted by a god, and the more so, as the facts themselves seemed to bear witness to it, his power, contrary to all expectation or probability, continually increasing.

Posted by david meadows on Aug-01-05 at 6:31 AM
Drop me a line to comment on this post!
Comments (which might be edited) will be appended to the original post as soon as possible with appropriate attribution.